Yeah. I think Treater forgot allllllll about ME. She has not helped me with this blog for two whole big long months. That's nearly a lifetime.

I really don't have much to tell. Mostly I've just been exploring new places to nap. I found a couple that are really good...no one can reach me there. That's a good thing 'cause my human sister's little tailpuller is 8 months old and faster than a speeding bullet. He and I haven't met yet, but I know that day is coming, so I'm getting prepared.

Aaaaaannnnndddd...as if that isn't bad enough, another little tailpuller was born into our family yesterday morning. She's a tiny little thing, so maybe she won't bother me. Much. Soon. Maybe.

Treater says that now she's a "Grand" and a "Great." Whatever that means. It just means trouble to me.

Here's one of those hiding places. It looks sort of upside-down, but Treater is holding the camera from above the TV/entertainment stuff and pointing down alongside the wall I'm trying to blend in with the wires. Is it working? 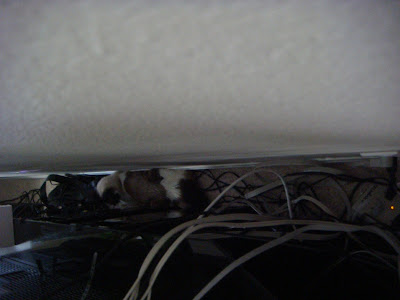 Also, one day last month, Treater met a blogging friend in person for the first time and they went to see a garden. Yeah, I know. A garden is a garden is a garden. They have trees and plants and anoles and birds and bugs and all sorts of interesting stuff. This one even had its very own Garden Cat. Whoa! This cat looks like a relative. I wonder... 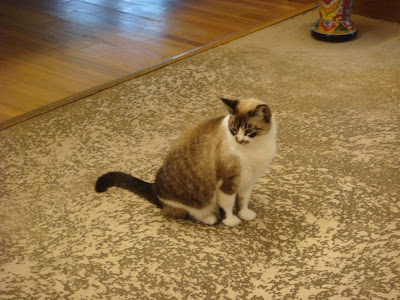 The Garden Cat even gets to go outside. Lucky... 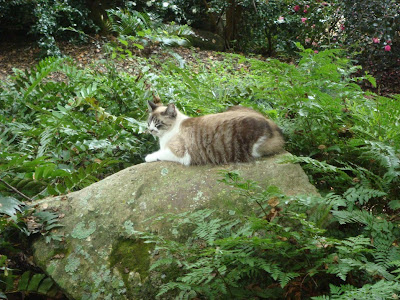 That's pretty much all that's been happening around here. Oh, Treater and Napper rearranged all of the furniture in the big room. They said something about a tree...would they really plant a tree inside the house? Well, whatever. It does give me a great place to sit and watch everything out the big window. Like the monster birds. They're out there right now. I made Treater run out and get a picture. The Papa Bird watches for trouble while his family eats.

While Papa Bird was watching Treater, Treater spotted a squirrel watching the birds. Squirrel was probably waiting for the birds and Treater to leave. He was pretty far from a tree.

That looks like a great hiding spot! I don't want your tail to get pulled!

You get a tree inside your home??? I hope we get to see pictures...and you have to tell me all about how it smells!!!

Glad to hear from you Spooky!!

Sounds like things are still pretty busy at your place.

Dear Spooky - greetings from California! I think lots of humans have been taking rests from helping us cats publish our blogs! But I'm back online today - at last!

Just in case this is a one-time blogging event for a while, I want to wish you a Merry Christmas.

Oh, and my human got to meet the famous Tiggie in person, as you may have heard by now. Tiggie has blogged about it.

Enjoy that tree they are putting in your house. Sometimes our people do treat us surprisingly good, with trees and toys and stuff.

You do find the best hiding places, by the way. You are the perfect colors to blend in with the wires and the wall. Excellent choice!

Happiest of Holidays to you!!