Today is a day for remembering.

Today is a day of tribute in honor of Storm and the battle she fought...and won.

Many of us cats came to a home in which other cats had lived before us. I know that my people had many other cats. Napper fondly remembers Duchess, the first Siamese who adopted his family. Treater said her family was adopted by many, many cats over the years.

When Treater and Napper married, they found Skeeter, a Blue Point Siamese. This picture is old! It was taken on Christmas Day in 1978! 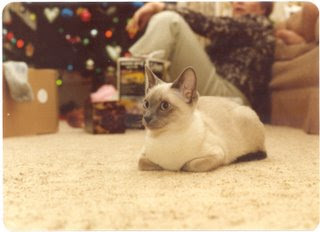 The second photo shows that Skeeter usually put herself in odd situations without thinking them through first. She saw this small brown paper bag sitting on Napper's desk. Treater said that Napper was in something called graduate school at the time. Treater said this about Skeeter and this picture:

She crawled in; apparently it didn't occur to her to back out - she attempted a U-turn instead and sort of got stuck. Napper held her up while I grabbed the camera. This photo was also taken in December 1978. 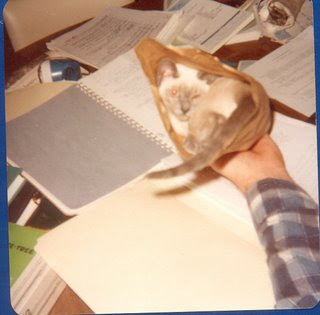 After Skeeter died too young, along came Shauna Li (left) and Brandywyne (right), both Seal Point Siamese cats. Treater wrote about these two:

These two were an extremely active pair, which usually resulted in some kind of damage around the house. We lost Brandy not too long after this photo in an unfortunate mishap (directly related to their mischievousness). So, after Shauna mourned for too long, we brought home Tua Mea Mau (according to a cousin-in-law from Thailand, that means “female cat”). Tu was a Chocolate Point Siamese. 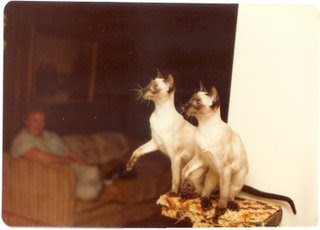 This picture (below) is of Tu when she was still a kitten. Here's what Treater wrote about Shauna and Tu:

It took a while for Shauna and Tu to adapt to each other, but they did become fast friends. After graduate school, we moved back to our hometown, and Tu decided she wasn’t happy in our new place. She became attached to my step-dad, and ended up living with him. They were inseparable! She knew when it was naptime, and would rush ahead to be the first one in bed. 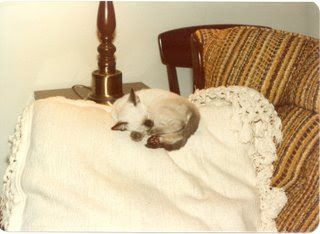 Once again, Shauna was the only cat in our household. By then, our daughter had come along, and it didn’t matter to Shauna if she wanted to carry her by the neck or drag her by the tail, as long as she was getting attention, she was happy.

After Shauna left, Gabrielle became part of this family. Gabrielle was a little Lilac Point Siamese. Again, here's what Treater wrote about Gabs:

Gabrielle was another affectionate kitty. She made the moves with us from Kentucky to Texas, and several years later from Texas to Florida. Gabrielle lived a long and happy life with us, despite being moved from state to state to state, and house to apartment to house, over and over again. 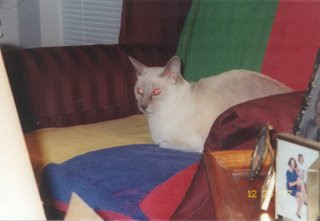 Remember the ones who have gone on.

Pray for Storm and her family today.

Your humans have had lots of beautiful Siamese! :) The One Who Came Before was a Seal Point Siamese, but our dad is extremely allergic to cats, so when Whiskers went to the Rainbow Bridge, our mom didn't get another cat. Fortunately, our humans found out our dad isn't allergic to Sphynx, and so first Dragonheart, and then Merlin, joined our family. :)

Oh my! I was reading this post with Mom and Mom started crying. She says she misses Gabbers so much. Luckily, she has me to take care of her. (We understand each other's moods!)

Storm's family is in my kitty-prayers.

We didn't know you had such a Siamese history in your family! This was such a lovely post and it really reminds my Meowmy of all of the wonderful kitties from her past, and especially Beau the lilac point siamese.

Today is a good day to think of Stormie, and to remember the Cats-Who-Came-Before.

Your beans have had tons of meezers! I am glad you have stepped in to take care of your family. That is what I did when Meowm lost She Who Came Before Me, China. mewom said her heart was broken after China's passing and I healed it.

Such sweet kitties, every one!

We are thinking of Storm too, a sad day.

Saw you got some greenies! That is exciting!

Those are wonderful memories. I was so sorry to hear about STorm.
Purrs,
JB

Very treasure memories....
I really want to hug you tight....